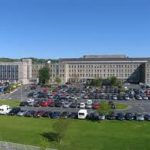 The latest figured from the Irish Nurses and Midwives Organisation show 8 people on trolleys at Letterkenny General Hospital.

The figures from the INMO were compiled this morning.

One person is on a  trolley at Sligo General Hospital.

The news that 8 people are in trolleys at Letterkenny General comes in the same week it was announced that the hospital has reduced the number of patients on trolleys from January this year compared to January 2012 by 61%.