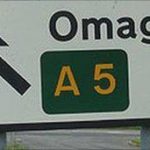 The A5 will probably never be fully completed, the High Court has been told.

Lawyers for a group seeking to block sections of the plan argued the Irish government is no longer committed to funding the overall upgrade.

The Irish government was to have provided £400m to the project, but later withdrew this and offered £50m.

It has said, however, that it remains politically committed to the A5.

A group of 18 farmers, businessmen and landowners, calling themselves the Alternative A5 Alliance, have launched a legal challenge to the planned 53-mile stretch of dual carriageway between Derry and Aughnacloy.

The alliance is now seeking to judicially review plans to press ahead with two sections of the route, for which the Northern Ireland Executive has approved £280m.

Work on the dual carriageway has been put on hold due to the legal intervention.

Lawyers for the alliance claim the Irish government is no longer committed to funding the overall upgrade.

The hearing, which is expected to last for three days, continues.