At a civic reception today in the County House, Lifford, the Donegal Hurling Team that won the Lory Meagher Cup in 2011 were honoured.

Speaking at this Civic Reception the County Manager, Mr. Seamus Neely said that he was delighted that Donegal County Council had an opportunity to recognise this special and historic won for the Donegal Hurlers.

This team reached the finals of the Lory Meagher Cup in 2009 and in 2010 but it was not until 2011 that the team achieved this victory with a 70th minute goal from Ciaran Mathewson securing this breathtaking win for Donegal. 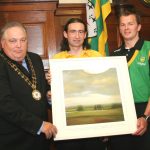 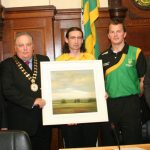 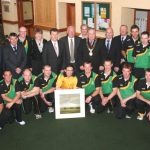