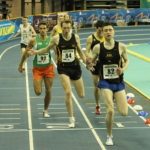 Mark English won the Irish Indoor 800m title on Sunday at the Odyssey in Belfast. Letterkenny’s national junior record holder who led for most of the race came home to win impressively in a time of 1:51:62 and take his first senior title. English’s teammate Darren Mc Brearty finished second just ahead of Niall Touhy to take silver. McBrearty will compete in Paris at the start of March at the European Indoors following his record breaking run earlier this month in  Vienna Austria. In the meantime for English, he will return to the books and his studies at St. Eunan’s College.
Tir Chonaill’s Mary Mc Loone was also on the winner’s podium at the weekend. Mary successfully defended her Triple Jump crown with a jump of 12.50m. McLoone who has been a medal winner and record holder at senior level for a number of years also took a silver medal in the Long Jump finishing behind Kelly Proper.  Elsewhere Finn Valley’s Tori Pena won her first ever Indoor Irish title in the pole vault with a jump of 4.10m. Letterkenny’s Danny Mooney brought home a silver medal from a brilliant run in the 1500m and Brendan Boyce finished 3rd in the 5kwalk.

Irish Team Manager Patsy Mc Gonagle says it was one of the better championships for Donegal.
[podcast]http://www.highlandradio.com/wp-content/uploads/2011/02/PATSY.mp3[/podcast]