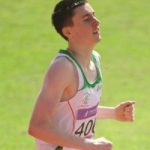 Letterkenny’s Mark English set a new Irish Junior 800m record on Sunday in Cardiff, Wales at the Celtic Indoor Cup and Schools International. English who represented Ireland at the World Youth Olympics Games last summer ran a time of 1.48.6 which was also inside the standard for the European Junior Championships in Estonia. The old record of 1.49.21 was set in 1993 by David Matthew.  Also in Cardiff, English’s clubmate Darren Mc Brearty finished second in the 800m to qualifying for the European Under 23 Championships to be held in the Czech Republic. Darren who recently ran for Ireland at the European Cross Country Championships came home in 1.48.8 to take the silver medal. St Eunan’s college student Ruairi Finnegan come home second in the 1500m in Cardiff. His time of 3.54.93 was inside the qualifying time for the European Youth Olympic Festival in Turkey. The fourth Donegal athlete in action was Finn Valley’s John Kelly, who won the schools  shot putt competition with a throw of 13.78.