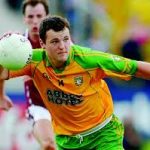 Michael Murphy will captain the Donegal footballers in 2011. The former Young Footballer of the Year succeeds Kevin Cassidy in the role and at just 21, becomes one of the youngest senior team captains in the country. Murphy skippered Donegal to an All-Ireland under 21 final appearance earlier this year and new senior boss Jim McGuinness, who managed the under 21s, clearly believes he is well up to the task of captaining what is expected to be a new-look  senior side in 2011.