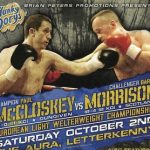 Paul McCloskey will enjoy home comforts for the second defence of his European Light Welterweight title against Barry “The Bizness” Morrison on the Hunky Dorys Fight Night at The Aura in Letterkenny on Saturday, October 2nd. The unbeaten Dungiven southpaw will be returning to the scene of his victory over former World Champ Cesar Bazan in 2008 as European Championship Boxing comes to Donegal for the very first time. McCloskey is currently rated number 4 in the World by the WBC and he will be looking to press his claims for a shot at the World's elite with the likes of Amir Khan and undefeated Americans Tim Bradley and Devon Alexander considered the marquee names in the Light Welterweight division.

Paul is looking forward to his return to Letterkenny.
[podcast]http://www.highlandradio.com/wp-content/uploads/2010/08/BOX-Paul.mp3[/podcast]

In the chief supporting contest in Letterkenny unbeaten Cavan star Andy Murray faces a major step up in class in an International ten round contest and Donegal’s own Michael Mc Laughlin will make his pro debut on the night.