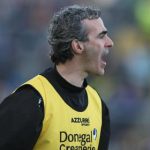 At Monday nights County Committee Meeting in Ballybofey Jim Mc Guinness was ratified as the new Donegal Senior Team Manager on a four year term. Guinness who was the only nomination for the job will also be staying in his role as Under21 Manager. The Glenties man has named his backroom team with Peter Mc Ginley and Pat Shovlin part of his Under21 set up coming on board, Maxi Curran will be on video analysis and County Development Officer Michael Mc Menamin will act as logistics official. Mc Guinness will also named another member of the backroom team at a later date. It’s believed the person for that job will come in with an experienced background.

The new Senior Team Manager is in no doubt of the task ahead.
[podcast]http://www.highlandradio.com/wp-content/uploads/2010/07/JIM-TUEPM.mp3[/podcast]

McGuinness is now weighing up who will be available for his first year in charge. He  added that belief within a squad will be key to move on.
[podcast]http://www.highlandradio.com/wp-content/uploads/2010/07/JIM-WEDAM-2.mp3[/podcast]

April 15, 2021
A Donegal Minister says while Donegal is above the national average in terms the Covid-19 rate, it's by no means the worst. Despite the...